A previous blog post Census 2016 Preliminary Results – What does it say about the Western Region? provided some headline figures on population and migration data in 2016 and changes since 2011.

Here I examine two further aspects; housing stock and vacancy rates and examine what is happening at a Western Region and county level.

What is the housing stock in the Western Region?

In April 2016, the Western Region had a housing stock of 404,494, an increase of 0.8% or 3,183 on 2011. Nationally the increase was 0.9% over this period (18,981). These relatively small increases are not surprising following the economic crash and the very limited house building that has taken place since then.

Within the Western Region there was an actual decline in housing stock in three of the counties, (see Table 1 below), Roscommon, -0.5% (-173), Sligo -0.2% (-51) and Leitrim -0.2% (-36), indicating some houses have been removed from the housing stock, though the data does not tell us whether these are ‘ghost estates’ or not.   Though these are marginal changes, there are also negative declines in just a few other places, Dublin and Limerick cities and Longford. In contrast, within the Region, only Galway city records a significant increase in housing stock – 3.5% – the highest recorded increase across the State.

The evident contrast between the growth in supply in the earlier period and the limited growth and contraction in the latter period highlights the difference in housing activity over the periods.

It is worth noting that even with the limited growth in housing stock in the latter period, the growth in the Western Region between 2006 and 2016 of 16.4% is still nearly than double the population growth in the Region over the same period – 8.6%.

Looking at the period 2011-2016, the percentage change in both population and households by county is presented in Figure 7 below. While Donegal lost population (-1.5%) it still experienced a small increase in the number of households (0.8%). 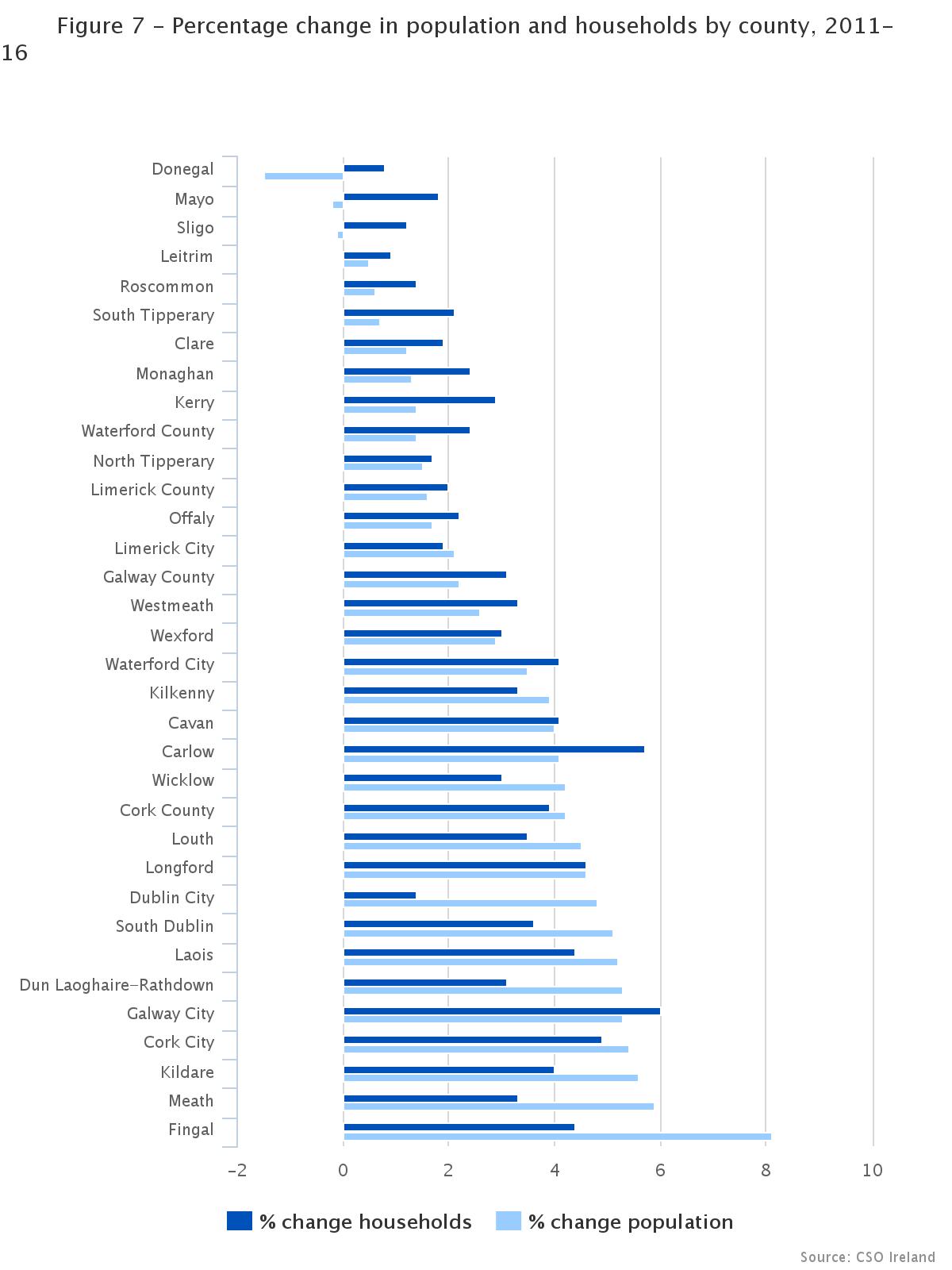 What are the vacancy rates in the region?

The vacancy rate measures the share of the housing stock in each county that is recorded as a vacant dwelling by the Census enumerators.  The average vacancy rate in the Western Region in 2016 was 21.7%, marginally lower than in 2006 (22.8%).

These data, though preliminary highlight a couple of important themes.

The first is that it is very clear that there are huge differences in housing stock and vacancy rates across the country.

This analysis also highlights the value of a five yearly census. As Table 1 illustrates the difference evident in the last 5 years, compared to the previous 5 years is particularly evident in examining the changes to the hosing stock.

The Construction Sector in the Western Region

Regional Difference, Regional Strategies and a Ratio- employment and residence in towns in Ireland.

Travel to work profile of workers living in the Western Region

New WDC Publication: WDC Policy Briefing No.7 e-Working in the Western Region: A Review of the Evidence

[newsletters_subscribe list="1"]
Planning For Regional Development- Book now for the Annual Conference of the...

Local Property Tax in the Western Region
Scroll to top
We use cookies to ensure that we give you the best experience on our website. If you continue to use this site we will assume that you are happy with it.OkRead more