The Regional Studies Association Irish Branch Annual Conference was held in the Institute of Technology Sligo on Friday 7th September.  Appropriate for the location, it had the theme “City Led Regional Development and Peripheral Regions”.  The presentations are available here. 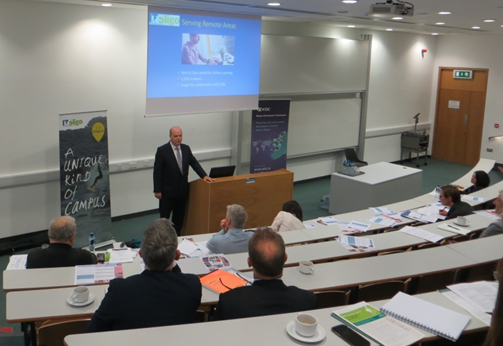 The conference covered a range of themes relating to regional development and how urban areas interact with their rural regions.  It was opened by Dr Chris O’Malley from Sligo IT who discussed the role of Sligo IT in the development of industry and manufacturing in the region and the IT’s role as an integrator of national policy at regional level.  Dr Deirdre Garvey, chairperson of the Western Development Commission, welcomed delegates to the conference noting how pleased the WDC was to be sponsoring the Annual Conference.  She also welcomed the fact that the conference was taking place in the North West, given the recognition in the National Planning Framework of the specific challenges for the region and how the National Planning Framework (NPF) and Regional Spatial and Economic Strategy (RSES) process highlight the distinct challenges and opportunities for our predominantly rural region.

These addresses were followed by a very interesting session on the history of Irish planning over the last 50 years.  Dr Proinnsias Breathnach (Maynooth University) presented on regional development policy following the 1968 Buchanan report and its impact on industry locations and spatial development.  Dr Breathnach also presented the paper by Prof. Jim Walsh (Maynooth University) who was unable to attend the conference.  He examined the influence of both the Buchanan report and the 2002 National Spatial Strategy, considered the learnings from these and the factors which will influence the success of the National Planning Framework process.  Finally in this session, Prof. Des McCafferty (University of Limerick) presented on the structural and spatial evolution of the Irish urban hierarchy since Buchanan, and examined urban population data over time and the distribution of population across the settlement hierarchy.  He noted that it was important to understand changes projected by the NPF in the context of historic trends 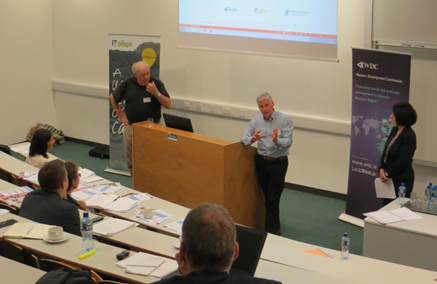 After coffee the session on Regional Strategy and Planning covered a broad range of topics.  Louis Nuachi (DIT) presented on the importance of social and cultural objectives in town planning using a case study of planning in Abuja, the capital of Nigeria.  David Minton, the CEO of the Northern and Western Regional Assembly (NWRA) discussed issues for the development of the North and West in the RSES, some of the historic development of the region and a number of the challenges in developing a region wide approach.  Finally in that session, John Nugent (IDA) discussed the IDA role in attracting Foreign Direct Investment to the region and some of the important factors which influence the location of FDI, including the importance of having a strong indigenous sector already in place and the ways the indigenous and foreign sectors are mutually beneficial.

After lunch international perspectives were provided by Dr Andrew Copus from the James Hutton Institute in Aberdeen and Professor Mark Partridge, the C. William Swank Chair of Rural-Urban Policy at The Ohio State University.

Dr Copus paper  The Scottish City Region Deals – A rural development perspective noted that optimistic assumptions about how a wider functional region benefits from city investments, are commonplace and generally unquestioned, despite meagre evidence of such impacts.   He discussed the two strands of ideas on policy for urban rural development that of polycentricity and rural urban co-operation (theories which are stronger in EU countries and in OECD work), and City Regions (which have tended to have more focus in the UK).  He highlighted the importance of defining what is meant by rural when considering the impact of such regional policies and  he discussed the development and implementation of regional policy by the Scottish and UK governments in Scotland.

He noted that in general in these deals the dominant rationale relates more to “Smart Specialisation” than to any kind of urban rural cooperation, interaction or spread effect concept, but the way growth deals developing for rural areas of Scotland will fit into the Post Brexit rural development landscape remains to be seen. 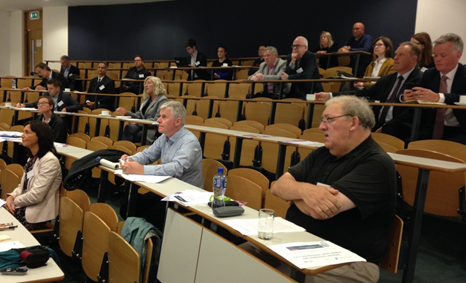 Figure 3: Audience at the conference

Prof. Mark Partridge’s paper Is there a future for Rural in an Urbanizing World and Should We Care? noted how rural areas have received increased attention with the rise of right-wing populist parties in Western countries, in which a strong part of their support is rural based. Thus, bridging this rural-urban economic divide takes on added importance in not only improving the individual livelihoods of rural residents but in increasing social cohesion.

He discussed the background of rural and peripheral economic growth, noting the United States is a good place to examine these due its spatial heterogeneity.   He showed that, contrary to public perceptions, in the US urban areas do not entirely dominate rural areas in terms of growth.  Rural US counties with greater shares of knowledge workers grow faster than metro areas (even metros with knowledge workers).

He had some clear suggestions for regional policy, noting that governance should shift from separate farm/rural/urban policies to a regional policy though a key issue is to get all actors to participate and believe their input is valued. In rural development it is important to leverage local social capital and networks to promote good governance and to treat all businesses alike and avoid “picking winners.  Rural communities should be attractive to knowledge workers and commuters, while quality of life, pleasant environment, sustainable development; good public services such as schools are important to attract return migrants.  Building local entrepreneurship is key too and business retention and expansion is better than tax incentives for outside investment. 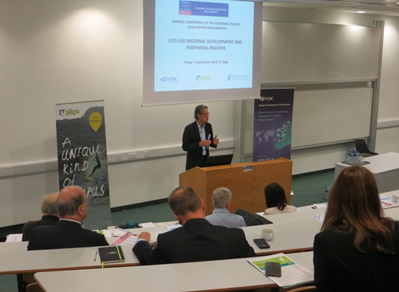 In the final session ‘Understanding Regional and Urban Dynamics’ I gave a presentation on what regional accounts can tell up about our regional economies and discussed some of the issues associated with the regional data and the widening of disparities among regions.  Dr Chris Van Egeraat (Maynooth University) presented a paper, written with Dr Justin Doran (UCC) which used a similar method to Prof. Partridge to estimate trickle down effects of Irish Urban centres and how they influence the population in their wider regions.  Finally Prof. Edgar Morgenroth (DCU) presented on the impacts of improvements in transport accessibility across Ireland highlighting some of the changes in accessibility over time and noted that despite these changes human capital is the most important factor influencing an area’s development.

SMEs in Ireland: What are the issues?

Self-employment – What does the Census tell us?

Does a Rising tide lift all Boats? A look at the latest CSO data on Poverty and…

Unemployment declining in Western Region at a slower pace

Professional Services in the Western Region

Tomás Ó Síocháin appointed as CEO as the WDC welcomes renewed focus on Regional...
Scroll to top
We use cookies to ensure that we give you the best experience on our website. If you continue to use this site we will assume that you are happy with it.OkRead more