The Western Development Commission (WDC) has just published the last in its ‘Regional Sectoral Profiles’ series which analysed the most recent employment and enterprise data for the Western Region on specific economic sectors and identified key policy issues.[1]

The final report examines the Transportation & Storage sector.  This includes activities such as taxis, bus companies, airlines and airports, haulage firms, couriers and services for the transportation sector.  Although it is among the smallest direct employers in the region, it’s significance to the regional economy and society is considerably greater, given its vital role in facilitating business activity, as well as providing services to individuals and communities.  Two publications are available:

According to Census 2016, 10,758 people worked in Transport & Storage in the Western Region.  Transport & Storage plays a smaller role in the region’s labour market than nationally (Fig. 1), accounting for 3.2% of total employment in the region compared with 4.0%. One of the reasons is the high concentration of this sector in Dublin due to the presence of Dublin Airport, Dublin Port, Dublin Bus and the headquarters of airlines and national transport companies

Among western counties, Clare has by far the highest share working in Transport & Storage (5.2%).  This is clearly due to the presence of Shannon Airport and Clare has the fourth highest share of its employment in this sector in Ireland.[2]  Roscommon has the next highest share in the Western Region, likely due to its very central location and the activities of logistics operations. At just 2.2% of total employment, Galway City has the lowest share working in the sector in the region and also in the state. 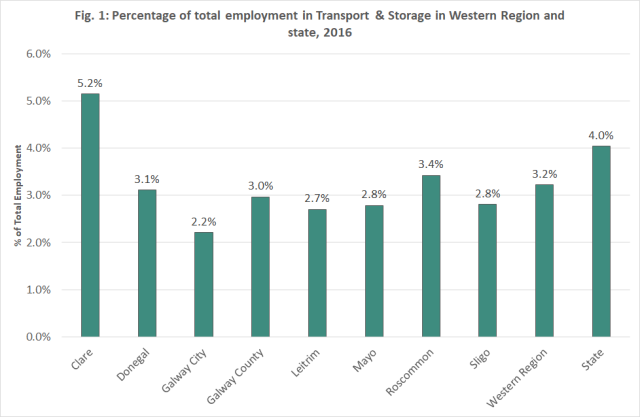 ‘Postal, Courier, Warehousing & Cargo’ is the largest sub-sector in the Western Region (27% of total employment in Transport & Storage), and accounts for a higher share than nationally (23.8%).  The next largest is ‘Road Freight’ which is also more important in the region (21.2% v 18.4%). This illustrates the importance of the logistics sector in the region, which may not be surprising given its distance from the main international entry and exit points of Dublin Airport and Dublin Port.

In Clare, ‘Other Transport & Storage & Services’, which would include aviation services around Shannon, is the largest sub-sector while for Galway City ‘Taxi operation’ is largest with taxis being far more common in the city than elsewhere.  In Donegal ‘Road Freight’ is the biggest sub-sector and given the potential impact of Brexit on haulage, this is an issue of concern.  For all other western counties ‘Postal, Courier, Warehousing & Cargo’ is largest.

In the region, the strongest jobs growth (2011-2016) was in ‘Road Freight’ with employment increasing by 20% in the region, higher than the 15.9% growth nationally.  Only one sub-sector saw a decline with a 29.2% fall in the number working in ‘Taxi operation’ in the region.  Following growth in taxi numbers with de-regulation, over-supply of taxis in certain areas and increased alternative job opportunities with economic recovery, led to people leaving taxi driving.

Employment in this sector is highly male dominated with men accounting for 79.4% of the total Transport & Storage workforce in the Western Region.  Clare has the highest female share due to activity in aviation, while Donegal, where road freight is the largest activity, has the highest male share.

Of all those working in Transport & Storage, 20.1% are self-employed (employer or own account worker). This is higher than the region’s average rate of self-employment (18.3%).  Galway City (30.8%), Donegal (25.6%) and Sligo (23%) have the highest rates of self-employment and are also where ‘Taxi operation’ is most important.

There was an 18.3% decline in the number of self-employed working in Transport & Storage in the Western Region (2011-2016), the second largest decline of any economic sector.

When considering towns, commuting can be particularly important and it must be remembered that this data refers to residents of the towns, although some may travel to work elsewhere.

Eight towns in the Western Region are among the bottom ten towns in Ireland in terms of the share working in Transport & Storage.  Six towns in the region have less than 2% of their employment in the sector. 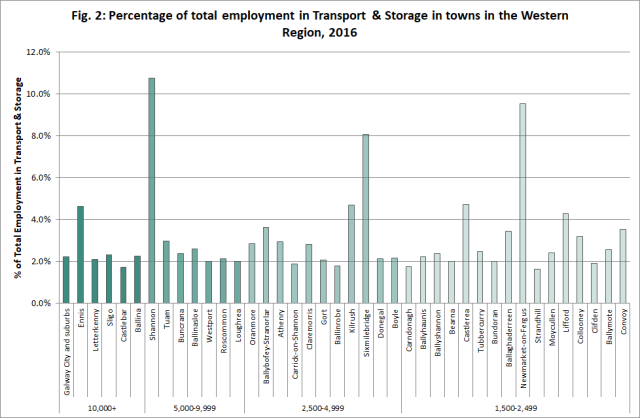 In 2017[4]  there were 3,291 Transport & Storage enterprises registered in the Western Region. This was 5.7% of total enterprises[5], well below the 7.6% share in the state.  The concentration of this sector around Dublin would be a factor in this pattern.

There was a 6.3% decrease in the number of Transport & Storage enterprises registered in the Western Region between 2012 and 2017 (Fig. 3).  This was a poorer performance than nationally where there was a 2.1% decline.  In both areas, the decline in the Transport & Storage sector contrasted with growth in overall enterprises.[7] Looking more closely at the data, there was the first sign of recovery in enterprise numbers between 2016 and 2017, so it could be expected that there has been some growth in the sector in more recent years. 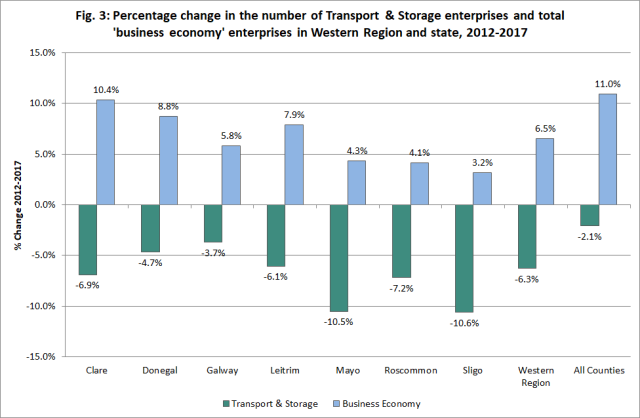 Smaller scale operations and high self-employment: Transport & Storage enterprises in the Western Region tend to be smaller in scale.  Self-employment in the sector declined as the economy recovered, largely due to a drop in the number of taxi drivers. Continuation of existing, and the development of new, initiatives and soft supports for sole traders and micro-enterprises is important to the future of the Transport & Storage sector in the region.

Responds to and facilitates economic growth: This sector depends on the level of activity in the domestic economy as this determines demand from commercial clients and private individuals.  As well as responding to economic growth, it also facilitates it e.g. by providing logistics services to business. Therefore, the presence of a strong Transport & Storage sector within the region, particularly given its peripheral location, is a key driver for regional economic growth.

Further development of the Western Region’s Airports: Shannon Airport plays a strategic national role in the transport sector.  In addition to transport services, there is considerable and growing activity in support services for the aviation industry.  At the same time, increasing international air access via Ireland West Airport Knock is important to improve accessibility for the West and North West.  The National Aviation Policy should be reviewed in order to further increase the role and capacity of these airports and reduce the dominance of Dublin Airport.

Brexit: The haulage and logistics sector will be among those most affected by Brexit.  The sector in Donegal potentially faces particular challenges.  It is important that the impact of Brexit be minimised and that haulage firms are supported in their efforts to adapt.  The Western Region’s peripheral location, and the role of the sector in facilitating wider economic activity, means this is of vital economic importance.

Opportunities in the logistics sector: Highly complex and integrated processes in manufacturing and retail increasingly rely on sophisticated logistics to minimise the time and cost of distribution and supply. In addition, the growth of online retail has greatly increased demand for postal and courier services. Given its central location, Roscommon has particular potential to further develop activity in this area.  Adaption to a low carbon economy is another area of opportunity for the freight sector.

[3] All other towns in the top ten are surrounding Dublin Airport.

[4] Data in this section is from CSO, Business Demography 2017

[5] Total enterprises includes all ‘business economy’ enterprises (NACE Rev 2 B to N(-642)) plus the sectors of Health & Social Work, Education, Arts, Entertainment & Recreation and Other Services.

[6] Business Demography data does not distinguish between Galway City and Galway County.

[7] As Business Demography data is not available for some sectors until 2015, changes over time are not based on ‘total enterprises’ but a sub-set of this called ‘business economy’ enterprises. This is sectors NACE Rev 2 B to N(-642) which is all economic sectors except Agriculture, Forestry & Fishing, Public Administration & Defence, Health & Social Work, Education, Arts, Entertainment & Recreation and Other Services.

Jobs Recovery and the Western Region

Next Generation Rural Broadband – When and How Much?

Future Work - What will work and workers be like in the future?

So much data. So little time.

Regional Sectoral Profiles: The Complete Collection
Scroll to top
We use cookies to ensure that we give you the best experience on our website. If you continue to use this site we will assume that you are happy with it.OkRead more